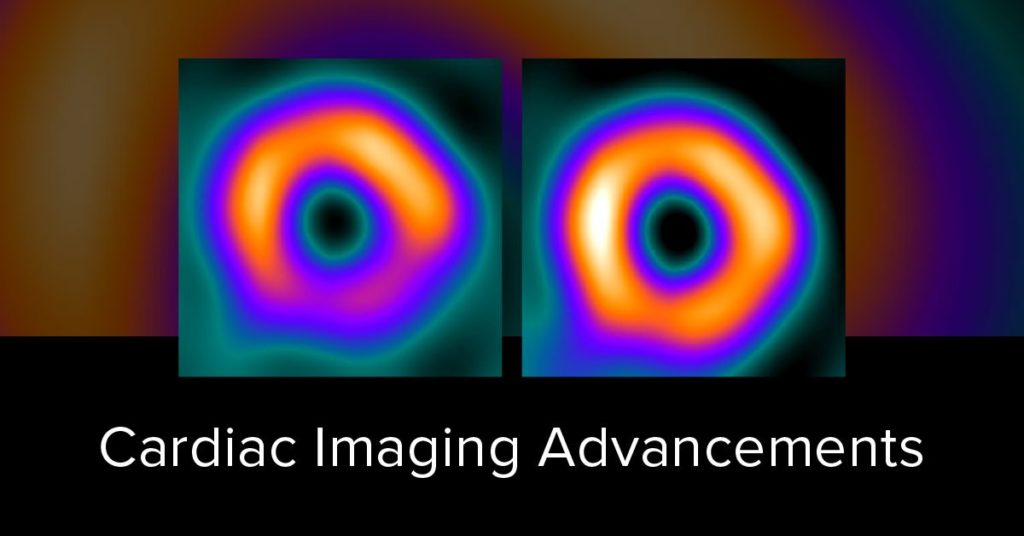 While cardiac imaging has seen drastic advancements in image quality, inconclusive scans still happen, and when they do, cardiac catheterization is the smart choice. When faced with a questionable scan, the risk of a false negative far outweighs the potential of a false positive.

While false positives are a fact of life, unnecessary cardiac catheterizations are not beneficial for patients or the healthcare industry. The good news is that technology has continued to develop, enabling cardiologists to have more diagnostic certainty about the images they review.

In this post, we take an in-depth look at how cardiac imaging innovations are helping cardiologists reduce the number of unnecessary caths and improve patient management decisions.

The Source of “Grey Area” Scans

These are real problems for readers and referring physicians that must make decisions on the best course of care for the best outcome for their patients.

Many times, the source of the “gray area” is attenuation in the image. Any material that blocks the heart can be responsible for attenuation. It could be caused by anything from a large abdomen or breast tissue to the physical location of the patients’ diaphragm or even bone. The artifacts created can appear as fixed defects suggestive of myocardial infarction or can appear as reversible and, therefore, suggestive of ischemia.

Ultimately, if you want clearer, more conclusive images, you need to remove the potential obstruction (attenuation) to clearly see what is happening within the heart. Using imaging equipment with attenuation correction capabilities is a way to create clearer images and improve clinical confidence in the image itself.

Attenuation correction is a mechanism that removes soft tissue artifacts from nuclear images. The goal is to reduce the impact of attenuation to provide truer, more uniform images and allow for higher reading confidence.

While the concept of Attenuation Correction has existed in cardiology for years, technology has evolved to a point where the shortcomings of scanning line sources have been replaced with state-of-the-art, fluoresce-based technology making SPECT MPI with true attenuation correction cost-effective, practical, and easy to implement in nuclear cardiology labs.

Fluoresce Attenuation Correction is a method that utilizes a fluorescence x-ray, which enables a better, cleaner image. It allows for a lower dose and less radiation exposure to the patient. By combining FAC technology with SPECT, cardiologists can identify false artifacts and capture the accurate distribution of the imaging agent, thus allowing for higher reading confidence and diagnostic accuracy.

Images from Cardiac PET cameras typically offer excellent clarity and resolution due to the high-count rates and high energy level of the PET MPI agents.

While there is a general consensus about the quality of a PET MPI image, many cardiologists do not realize is that much of the benefit is derived from the fact that PET MPI studies utilize attenuation correction. A ‘standard’ PET system always has source-based Attenuation Correction while PET/CT systems utilize the CT to generate the source ray for the Attenuation Correction Map.

During the CT portion of a PET scan, the CT essentially sends x-rays, in a 3D manner, through the patient’s body, and these x-ray signals are detected 180 degrees from the x-ray source. While traveling through the body, these x-rays will encounter different body habitus densities – air in the lungs, dense bones, breast tissue, etc. – that all attenuate the PET radiopharmaceutical differently.

Once the x-ray signal is detected, the computer translates the images into a pixelated image, which we are accustomed to seeing as a standard CT. The individual pixels within the CT image not only provide us with something to view, but they also provide us with a number, called a Hounsfield unit, which tells us how dense the body habitus was within that individual pixel.

These Hounsfield unit numbers are then used as a multiplication factor to be applied to the PET images to correct for differing densities or attenuation within the body – attenuation correction.

Using both CT and PET to cross-check data and corroborate each other is a way to increase confidence and reduce guesswork. It gives significantly more accurate data points to reference in order to determine a diagnosis and treatment plan.

The PET technology imaging accounts for a portion of the imaging clarity, but the CT component enables attenuation correction, which plays a significant role in the overall quality of the image.

While the diagnostic benefits of Cardiac PET are clear, it’s essential to understand the financials and investments needed to offer the service before making a commitment.

Ultimately, the way to reduce the number of false positives is to produce clearer images that allow for a more definitive diagnosis.

Attenuation correction is a proven way to gain this clarity, and both SPECT with FAC and PET/CT cameras are a way to add this feature to your imaging department.

While the image quality of PET is considered higher, SPECT with FAC utilizes the benefits of attention correction to enhance the image significantly compared to a standard SPECT MPI study.

When taken with the overall costs of the camera, consumables, and reimbursement stability, SPECT with FAC is the solid choice for practices looking to upgrade their image quality.

If you are interested in SPECT with Fluoresce Attenuation Correction, visit Digirad to learn more about the X-ACT+ and how it leverages FAC to create clearer images and reduce unnecessary cardiac catheterizations.