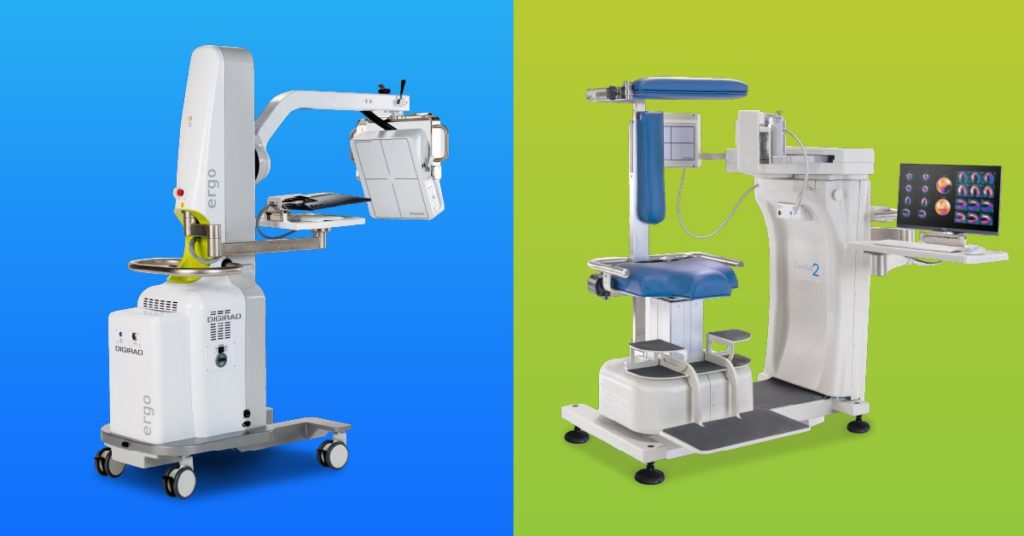 Digirad today announced the launch of updated versions of its Ergo general-purpose nuclear camera, and Cardius line of SPECT cameras. The upgraded cameras were developed throughout 2019 and are making their clinical debut this quarter in markets throughout the United States and Canada.

As the process of updating the cameras began, the team at Digirad decided to study how the cameras were used and how the equipment could be improved to help the clinicians who use them daily. This led to a focus on key features that could benefit the workflow for technologists.

Walt Tsao, Senior Director of Operations, led the effort within Digirad and brought a fresh perspective to the process of updating the cameras. “It was important for us to streamline the manufacturing process and leverage the innovations we made with our cameras across the entire product line,” said Tsao.

The result was a new production system that maximized the manufacturing resources and enabled a host of improvements to the nuclear gamma cameras.

Greater Portability for the Ergo

While the Ergo has always been a tremendously versatile general-purpose nuclear gamma camera, it had limitations when the camera was unplugged. Though still portable, the lead-acid battery technology capped the time it could be used without a charge.

The 2020 Ergo features an all-new lithium-ion battery and builds on the progress that has been made with battery life and usability.

With the new lithium-ion battery, Ergo users will see much better performance across the board. The enhancements result in 6x greater battery life when operating the Ergo using battery power.

Additionally, instead of using a stand and a laptop, the new 2020 Ergo features an integrated computer with a larger monitor and better processing performance.

The Cardius line of SPECT cameras also saw significant updates with a focus on usability. The 2020 C2 and C3 models are a true “all-in-one” nuclear camera, and for the first time, there is no need for a side cart.

Previous generations of Cardius C2 and C3 camera required a secondary cart that acted as a processing station for the camera. Now, the camera has everything you need in a single unit with the computer built into the gantry.

While this is seemingly a small change, it drastically improves the usability of the C2 and C3 cameras. With an integrated computer and power supply, moving the camera has become much easier. Combining the pieces into a single unit makes the camera more reliable and increases overall uptime.

These updates add a new layer of functionality to the high-speed, high-resolution imaging that users expect from a Digirad Cardius nuclear camera.

This year marks a significant anniversary for both Digirad and nuclear imaging. In June of 2000, the first commercially performed solid-state nuclear medicine scan was captured using a Digirad camera.

To mark the occasion, limited editions of the new Ergo and Cardius cameras will be manufactured and available throughout 2020. These select models feature unique fixtures and elements that mark the milestone for nuclear imaging.

“The 20th anniversary of the first solid-state scan is a significant moment for nuclear imaging, and we’re proud of the role Digirad has played in the development of this technology,” said Matt Molchan, Digirad CEO. “Our team has built off that legacy, and the new Cardius and Ergo cameras represent the future solid-state nuclear medicine.”

Manufacturing of the updated Cardius and Ergo cameras began in late 2019, and pre-orders have started shipping across the United States and Canada.

“The updates we’ve made to the Cardius and Ergo set our customers on a better path to success while also improving our manufacturing process. I’m thrilled to see the new models being so well received in the market,” said Walt Tsao.

Since 2000, Digirad cameras have been manufactured in California by Digirad’s team of nuclear imaging professionals. The updated models are available for order now and will be ready for delivery throughout the year.

Are you interested in seeing the new Ergo or Cardius? Contact the Digirad team for a virtual demo of the cameras.